« Is My Museum Lying To Me? | Main | Reb Landmarks Respected by Proposed Georgia Law »

Spook Hill Monument: An Uphill (Or Is It Downhill?) Battle

Lake Wales, Florida, is the site of Spook Hill, among the most famous “gravity hills” in the world. You park your car at the bottom — the town has painted a helpful line on the street at the starting point — put it in neutral, then sit in amazement as you roll uphill.

But if you ask “Why?” then you have a problem. 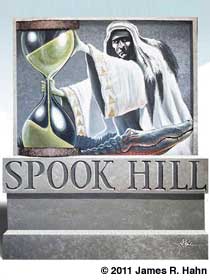 Enter James Hahn. He’s an artist/gallery owner who grew up in Florida and loves oddball roadside attractions (He painted the murals at the original Babyland General Hospital).

Hahn told us that an organization named Leadership Lake Wales approached him to come up with a way to call attention to Spook Hill. So in 2011 he created a design for a 12-foot-tall monument that would stand near the Spook Hill starting line. It shows an alligator and a mysterious-looking Indian, who’s grasping a giant hourglass with sand tilted at strange angles. The design, Hahn told us, hearkens to a local legend of a gator-wresting Seminole chief whose spirit created the forces at Spook Hill (The hourglass is Hahn’s own artistic/branding contribution).

Hahn took the idea and the illustration to the Lake Wales City Commission, which gave him the go-ahead to build the monument.

Not so fast, said David Smith, president of the Lake Wales branch of the NAACP and a life-long Lake Wales resident. Smith told the Commission (and later repeated it to us) that the story that he had always heard was that a black man named Buster Coon had parked his car at the bottom of Spook Hill to go fishing. One day he left the car in neutral, it began rolling uphill, Coon fainted, and when he finally got home he told everyone that “spooks” had moved his car. That’s the origin of Spook Hill, said Smith. Why doesn’t the town put up a monument to that? Why is the City Commission allowing a non-local artist to immortalize a legend rather than bona-fide Lake Wales history?

James Hahn has said he is sticking with his design (he already has the t-shirts for sale). His position is that the Indian/alligator legend is as monument-worthy as the Buster Coon origin story, and that, anyway, both tales will be available through a hi-tech Spook Hill Monument app triggered by the smartphone or tablet cams of visitors. The app, according to Hahn, would also feature “a 3D version of the Native American Chief, who would point toward where you park your car to start the ‘uphill and backward’ roll the Hill is known for.”

David Smith of the NAACP is not impressed. He told us that he and his constituents intend to fight the Spook Hill Monument as it’s currently conceived, but it’s unclear what can be done since the Lake Wales City Commission has already given Hahn the go-ahead for the project. Hahn, for his part, says that no piece of public art ever pleases everyone (We could cite one or two choice examples). “If you are so upset by my design,” he asked rhetorically, “then … why have you not taken up a crusade of your own to maintain and commemorate the Hill?”

N. Wales Drive, Lake Wales, FL
Directions:
The sign marking the start point of Spook Hill is on the east side of N. Wales Drive/5th St. about a quarter-mile south of Hwy 17/Burns Ave.
Hours:
Public road. Hazard flashers recommended. Use at your own risk. Local health policies may affect hours and access.
RA Rates:
Worth a Detour

4 Responses to “Spook Hill Monument: An Uphill (Or Is It Downhill?) Battle”