We appreciate when a large thing has more going for it than just swollen volume, its builders boldly pushing beyond first-level “World’s Largest” thinking.   “We could just create an immense wooden Trojan Horse,” they say, “but let’s build one with strobe light eyes and a go kart track for intestines!” 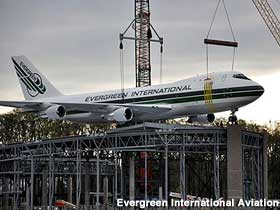 That same one-step-beyond spark is now firing in McMinnville, Oregon, where the Evergreen Aviation and Space Museum has completed the latest phase of its loopy scheme — to transform a mothballed 747 jetliner into the world’s greatest novelty water slide.

The “Wings and Waves” slide will cost a reported $25 million. The jumbo jet — 225 feet long, weighing 320,000 pounds — was lifted by two industrial cranes to a lofty framework that will eventually house a wine bar and a wave pool, among other amenities. When complete in May 2011, water will be pumped up to the roof and through the hollowed-out jetliner, where sliders will sluice through its exit doors into one of four clear plastic tubes that wind their way into a pool over 60 feet below!

It won’t be exactly the same as jumping out of a plane ditched at sea, but we expect that it’ll be a lot more enjoyable.