May 2010 marks the third anniversary of the opening of the Kansas Underground Salt Museum in Hutchinson, Kansas, and the flattening of the town of Greensburg, 90 miles away, by a tornado. 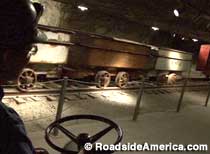 Unrelated? Hardly. Greensburg’s main attraction, The Big Well, is underground, like Hutchinson’s salt mine/museum. Yet three years later the well is in a very different place from the salt mine.

Despite an economy as flat as a Liberal, Kansas, pancake, the salt mine has held its own as an attraction. There are even plans to add a miniature underground railroad, purchased from a local amusement park. By the end of this year it will be winding its way through a currently off-limits “raw” part of the vast salty labyrinth beneath Hutchinson.

Greensburg’s Big Well, however, has been sealed since the tornado struck. Understandable, since a town completely devastated has many other priorities before worrying about tourism.   Yet the Big Well was why Greensburg was ever on the destination map, and they’ve chosen to carefully plot its future as a town asset. They want to open it as a $3 million state-of-the-art underground museum, designed by an architectural firm from Kansas City. 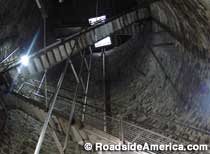 That sounds interesting, but according to the Kansas City Star, costs have ballooned because of “the remoteness of the site,” meaning Greensburg. The architects and construction crew can’t commute from their homes in the suburbs. They’d have to live in Greensburg, a farm town, for the duration.

It’s a dilemma. People love holes in the ground because they’re holes. A rustic hand-dug well attraction filled with a fancy, designed-out-of-town museum seems a little misguided, even if it was on schedule. Greensburg is already elevated as a destination — it’s the town that survived a tornado, became “green”-crazed, AND still has the Big Well. Maybe all they need are a couple of billboards to point this out to travelers.

More on The Big Well