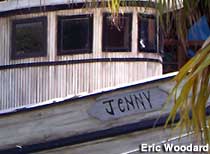 The Forrest Gump shrimp boat may be a prize piece of Hollywood flotsam. But would two restaurants really want to exhibit only half of it? Who wants to look at half of a boat — other than the Titanic?

We checked with Paul Hemus, the Curator of Memorabilia for Planet Hollywood. He said that the boat is still in one piece, and that it will likely remain that way, in a mini-lagoon surrounded by the Planet Hollywood franchise in Lake Buena Vista, Florida. It’s been there since 2004.

Paul described its relocation to Florida as “a massive, massive task” requiring lots of money, a giant crane, and a wrecked truck trailer — an ordeal that Planet Hollywood really would rather not go through again. The boat sank a couple of times on its trip from the Carolinas, and sank a couple of more times after its arrival. But its flimsy boards have since been sealed with fiberglass, making it into a kind of superboat (our conclusion, not Paul’s). 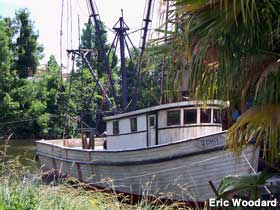 Since Forrest Gump’s boat was such a survivor in the movie, and since it’s now been beefed up with non-natural fibers, we wondered if Planet Hollywood might be tempted to return the boat to the Gulf of Mexico, which could certainly use all of the watercraft it can get that don’t sink in oil explosions or get destroyed by hurricanes. Paul said no. “We don’t even allow people on it now,” he said. “The pumps on it run 24 hours.”

Certainly not the kind of boat that anyone should expect to be cut in half.