In late 2007, sculptor Stan Watts finally erected his large statue of three 18-foot-tall firefighters raising a U.S. flag above the rubble of the World Trade Center — literally, with real rubble from Ground Zero scattered at their feet. 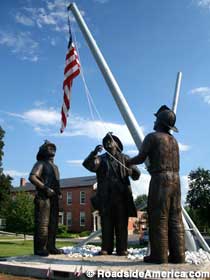 Watts had worked on the sculpture for five years. The 8-ton bronze, titled To Lift A Nation, had originally been intended for New York City; then Washington, DC; then Colorado Springs, Colorado. But all three cities rejected it as too big, or too impractical, or too much of a tourist attraction.

Now it stands on the grounds of the FEMA National Emergency Training Center in Emmitsburg, Maryland, which means that not many people from New York, Washington, of Colorado will ever see it.

The statue’s dedication marked the end of its saga — until recently, when it was reported that the statue’s construction was financed by investor fraud. A company named Coadum Advisors gave Watts $300,000 in 2006 to build the statue, which then was valued at $4.8 million and which Coadum hoped to write off its taxes. The SEC now says that Coadum was just a Ponzi scheme, using money from new investors to pay off earlier ones and pocketing the difference.

The SEC can’t seize Coadum’s almost $19 million in offshore accounts. But it’s seized the statue, and is looking for someone to buy it so that Coadum’s investors can get some of their money back. One good thing about To Lift A Nation being so big: it can’t be shipped offshore, and it probably isn’t going anywhere else.

16871 S. Seton Ave., Emmitsburg, MD
Directions:
On the grounds of the FEMA National Emergency Training Center, which is on the east side of S. Seton Ave. midway between the town and US 15. At the entrance you'll be stopped by a guard, hand in your license, and be given ID tags, a parking pass, and directions to the memorial.
Hours:
Grounds open M-F, otherwise gated. Local health policies may affect hours and access.
RA Rates:
Worth a Detour

One Response to “Jinxed 9-11 Statue in Trouble Again”