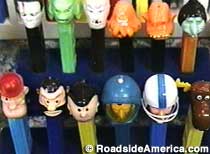 • Justice Dispensed by Pez: It’s been a sour news year in the normally candy-goodness world of Pez museums. First came word in late 2008 that the Pez Museum in Easton, Pennsylvania, had closed its doors forever. Now the wire services have reported that the other Pez Museum, in Burlingame, California, has been slapped with a federal lawsuit by Pez Candy Inc. The company wants the museum to destroy its custom-built giant snowman Pez dispenser.

• Michael Jackson Tourism: The recent death of Michael Jackson has revived hope in Gary, Indiana, that the King of Pop’s boyhood home will be turned into a tourist attraction. The Munster Times reports that planning for a birthplace pilgrimage site (like Elvis’s birthplace) began six years ago, but that “the plan stalled when Jackson became less reachable.” Now that’s he’s even less reachable more stalling will come, but take heart, Gary — it took five years after Elvis died for Graceland to open, and Michael Jackson wax tributes won’t satisfy his fans forever.

• Allman Brothers Museum: While we’re on the subject of rock and roll heaven, the “Big House” in Macon, Georgia, where the Allman Brothers Band lived (while founding members Duane Allman and Berry Oakley died nearby) is being turned into an Allman Brothers Band Museum. When it opens, reportedly in December, it will become the second new attraction honoring a classic southern music band starting with the letter A. We can’t think of any others, so Black Oak Arkansas may be next….

• Wack Pachs Gone: No gag lasts forever — not even a good one — and so the fiberglass elephants crossing the landfill of Waynesboro, Virginia, have been torn down. They appeared three months ago as an April Fool’s joke by local sculptor Mark Cline. Waynesboro’s manager, according to WVIR-TV, said that “the favorable comments far outnumbered the complaints,” but that the city couldn’t afford to handle the steady stream of tourists who wanted to cross the landfill to see the elephants.