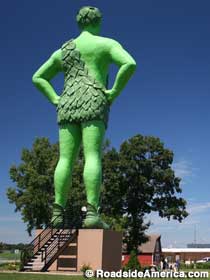 For three decades the Jolly Green Giant has cast a mighty shadow — formed by a body built by healthy vegetables — across Blue Earth, Minnesota. Standing over 55 feet tall, the Giant went up on July 6, 1979. He was the idea of a local radio station owner, not the Green Giant food corporation. The company that made the statue had to invent his backside, since Green Giant had never shown it in their advertising.

The Giant’s 30th birthday was celebrated in Blue Earth, then four days later the town opened “The Giant Museum Featuring Jolly Green Giant Memorabilia.” Its mouthful-of-creamed-corn name comes from its lack of an official association with the company. The museum, in a former fire house, displays the Jolly Green Giant collection of retired lifetime Green Giant employee Lowell Steen. “People bring things in, but we pretty much already probably have it,” said Shelly Greimann of the Blue Earth Chamber of Commerce. “Lowell’s collection is pretty complete.”

Some of his treasures include a plastic Green Giant chair shaped like a hand and a transistor radio that resembles a box of corn. Many of the items were sales giveaways or prizes redeemed for can labels, such as sprout flashlights, popsicle makers, shirts, aprons, puzzles, kites, and a can opener that looks like a can of niblets. The largest artifact in the museum is a nine-foot-tall inflatable Green Giant. “I don’t know of anyone else that has one,” said Shelly. “He says, ‘Ho Ho Ho!’ when you walk by him.”

Shelly mentioned that a long-time “dream” of Blue Earth was to install a button at the statue that would make the Giant boom “Ho Ho Ho!” as well. “But it always takes money, unfortunately.”