History was made just outside of Sylacauga, Alabama, in late November 1954. An 8.5-pound meteorite crashed through the ceiling of Ann Hodges’ home, bounced off of a radio, and hit her on the thigh. She was the first known person to be hit by a space rock. 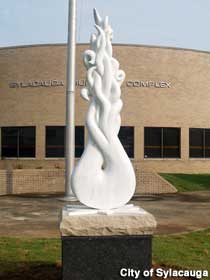 The meteorite was big news for a time, but that was a long time ago. Of late, the only local reminder of the meteorite has been a forgotten replica — Sylacauga’s mayor didn’t even know about it — in the town’s Isabel Anderson Comer Museum. The real meteorite was taken 100 miles west, where it remains a star attraction at Tuscaloosa’s Alabama Museum of Natural History.

It seemed as if Sylacauga’s space rock was destined to remain an afterthought, unlike other, less-important but better remembered meteorites. But that’s when a Kentucky stone sculptor named Don Lawler came to town.

Don didn’t know about the meteorite either. But he knew about Sylacauga, which calls itself “The Marble City” and sits atop a high-quality vein of the creamy rock. He and his wife (also a sculptor) took a detour through Sylacauga and bought a slab of marble from the local quarry. They also met the mayor, who was anxious to promote marble, not the meteorite. In fact, Don didn’t know anything about the meteorite until he started researching the town’s history on the Web, and that’s when he found out.

Inspired, Don carved the slab into an abstract memorial to the meteorite. He titled it Falling Star and “on a lark” sent a picture of it to Sylacauga’s city officials. Roused from their civic slumber, the town raised enough money to buy the sculpture, and on June 10 it was installed in a place of honor in front of City Hall.

Mayor Sam Wright is still eager to boost marble. The town now has an annual Marble Fest, and the mayor told us that Sylacauga wants to build a marble quarry observation point so that tourists can look at “the hole.” But Mayor Wright is now a meteorite fan as well. “We haven’t done much playing it up,” he admitted, but he said that Falling Star will have a plaque attached to its base, telling the story of the meteorite. “That sculpture was a great idea.”

Maybe next, Sylacauga will erect a marble statue of hometown hero Gomer Pyle?

Monument To The Housewife-Whacking Meteorite

More on Monument To The Housewife-Whacking Meteorite

One Response to “Monument to Lady-Whacking Meteorite”