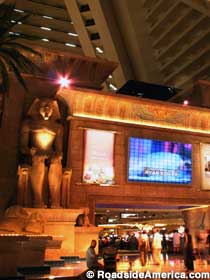 Dark reports we’ve received have proved true; the Egyptian-themed attractions inside the Luxor Pyramid in Las Vegas are gone. The John Dykstra special effects Imax ride is history, as is the reproduction of King Tut’s burial chamber — but on a happier note, all of the “authentic reproductions” from the tomb have been donated to the Las Vegas Natural History Museum. King Tut’s sarcophagus is no longer just a fake Egyptian artifact, it’s now a real artifact from a pyramid-shaped Las Vegas casino.

While we’re grateful for the survival of King Tut’s swag, we worry that the good folks at the Las Vegas Natural History Museum may be walking into a paradox loop. We witnessed the same condition at the American Dime Museum — a collection of fake exhibits that became exhibits because they were fake — and later learned that the attraction was sucked into its own irony maelstrom and was closed not long afterward. Also remember that the Las Vegas Natural History Museum is taking on the Tut Tomb curse. Pluck is on their side; perhaps only in Sin City can this kind of gamble pay off.