Man Of Steel Joined By Woman Of Bronze 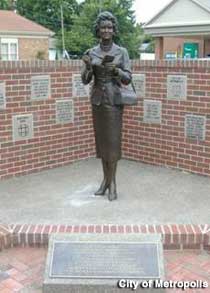 Metropolis, Illinois, was officially declared “Hometown of Superman” by DC Comics in 1972. But it wasn’t until 1993 that the town replaced a shrimpy, homely statue with a decent, 15-foot-tall heroic Superman. Now, 17 years later, Superman has been joined by a slightly less supersized Lois Lane.

The new Lois statue is modeled on actress Noel Neill, the “First Lady of Metropolis,” who played the plucky foil to George Reeves in the late 1950s Adventures of Superman TV series, and who’s been a frequent guest at Metropolis’s annual Superman Celebration. She was already in her mid-thirties when she played “girl reporter” Lois Lane on the show, and at age 89 she helped to unveil the statue along with a broad-chested Superman stand-in and the Metropolis mayor.

The 6+ foot-tall statue dwarfs the real Noel, who barely reaches five feet. It shows Lois in her tailored reporter’s suit and high heels, wearing a triple strand of pearls — standard lady TV journalist attire in the formal 1950s. With her purse dangling from one arm, Lois clutches a note pad, her pencil forever poised to get the latest scoop on Metropolis’s bottomless supply of thugs, spies, gangsters, mad scientists, and berserk robots.

W. 8th St., Metropolis, IL
Directions:
Downtown, on the northeast corner of W. 8th and Market Sts, between the chiropractor and the bank. Three blocks north of the Superman statue.

More on Lois Lane in Bronze

2 Responses to “Man Of Steel Joined By Woman Of Bronze”