No Rest At Rest Stop Of The Future

The Rest Stop of the Future is scheduled to open to the public in Newark, Delaware, on June 28, 2010. Normally we skip PR events, and don’t relish spending valuable road trip time at a highway rest stop. Yet the promotion of this forward-looking public convenience in tiny Delaware caught our attention. 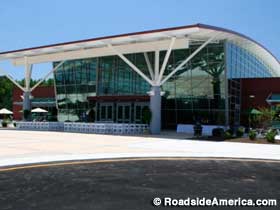 The Rest Stop of the Future stands in the median of I-95 at one of its busiest spots (it anticipates 4.5 million visitors a year). Fifty years ago, a Rest Stop of the Future might have had a monorail or at least a life-size holographic greeter (maybe Delaware’s Miles the Monster) but we found that “future” is no longer defined with show-off technology. Instead, Delaware’s Rest Stop touts an “environmentally sensitive and sustainable design” that includes waterless urinals, wood from “renewable forests,” and the fact that most of the old rest stop was ground up and used to build the new rest stop.

These are laudable achievements, and they sound important in a press release. But will they wow the average tourist family?

We asked one of the architects to describe the one thing that most distinguished the new rest stop from the old rest stop. His immediate answer: “more toilets.” 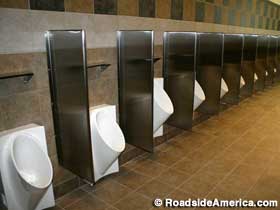 The Rest Stop also has a small Delaware Information center. According to a display in it, President Kennedy stood “only a few hundred yards from this spot” and dedicated the Delaware stretch of I-95 on November 14, 1963, which is why it’s still known as the JFK Highway. One of the Rest Stop executives told us that it was Kennedy’s last public PR appearance before he was killed eight days later. The spot is marked with a monument, and there’s a picture of it in the display. 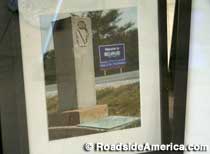 That seemed important to us, so we went looking — and discovered that “a few hundred yards” is in fact 5.5 miles away. The monument stands in the median of I-95 at the Maryland-Delaware border. In JFK’s time it might have been possible to pull off and snap a picture of it, but any attempt to do so now would probably get you arrested or killed. There are simply too many lanes, too many speeding drivers, too many cars (The Rest Stop has all of those toilets for a reason).

So we have a suggestion for the Rest Stop of the Future: grab that monument (or make a replica). The Rest Stop needs a photo-op: posing next to its rainwater bio-retention basin won’t cut it. And it won’t be the first time that a supposedly site-specific attraction has been moved for the benefit of visitors.

JFK was all about the future. He would have preferred a monorail, but if he hadn’t been assassinated he might have been at the Rest Stop of the Future, at age 93, giving a speech in praise of its waterless urinals.

Sections: Attraction News Comments Off on No Rest At Rest Stop Of The Future

Rest Stop of the Future

More on Rest Stop of the Future