For the past seven years, David Farrell has wanted to build a giant Lincoln Penny.

It would stand in downtown Springfield, Illinois, the city of many Abe Lincoln attractions. Despite his efforts, “Farrell’s penny,” as some call it, seems no closer to reality than it was in 2003. But that in no way dampens David’s enthusiasm for the project. 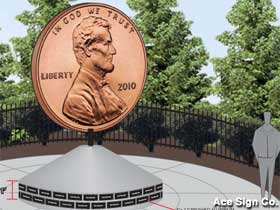 “You got Lincoln comin’ out your ears in this town, but nothing grand!” said David, who obviously feels that the Lincoln Ledger does not meet this standard. “You need something that says, ‘I have been to Springfield, Illinois,’ when you see it in a picture. If you get a shot of the Illinois Statehouse now, you might as well be in Iowa.”

David, a long-time Springfield civic booster, has conceived the penny with shutterbugs in mind. He wants it to be built on a specific downtown street corner so that the statehouse would, in fact, be visible in the background, “perfect for a TV news reporter.” Its size — eight feet tall on a five foot base — is calculated so that, “a six foot person could be right in the middle and wouldn’t block out Lincoln’s nose.” David ran through a list of all of the people he imagined posing with the penny: families, little league teams, wedding parties, busloads of senior citizens.

It sounds perfectly reasonable to us.

David did not know of the World’s Largest Penny in Woodruff, Wisconsin, when we mentioned it — built exactly 50 years before he had his Springfield penny idea (perhaps visions of giant pennies only come twice a century). However, David completely understood the thinking behind it. “Take something that already exists and put it on steroids!” he exclaimed. “A penny that big — that’s a keeper.” And he was encouraged by the Woodruff penny’s enduring popularity.

Although Springfield’s penny would not match Woodruff’s in size, it would still be very big — and much more shiny (We have the technology now to make really good giant pennies). “I don’t want people visiting Springfield to go straight back to the parking garage,” said David. “I want their kids to say, ‘Oh, wow! Look at that big penny!'”