Hunt Bigfoot With A Redneck 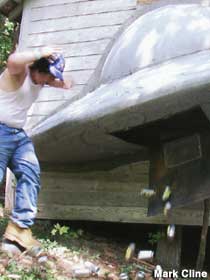 “When I was a kid, I was a member of the Bigfoot Fan Club,” said Mark Cline, recalling his misspent 1970s youth. “They sent you a record of his grunts.”

Decades passed, and Mark went on to create attractions such as Foamhenge and Dinosaur Kingdom. But thoughts of the hairy, shoe-challenged giant never completely left his feverish forebrain.

“Right after Halloween last year, I walked into Wal-Mart,” he said. “I saw 40 black afro-wigs at 90 percent off. I said, “I can get these for 80 cents apiece. What can I do with them? Well, I could make Bigfoot out of them….’ And, bam!, all of a sudden all the tumblers fell into place.”

The result is Mark Cline’s newest attraction, Hunt Bigfoot with a Redneck in Natural Bridge, Virginia. 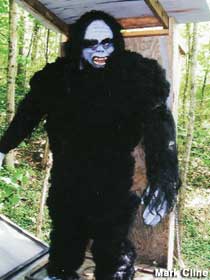 As Mark describes it, the attraction is an exercise in “adventure storytelling,” with lots of bad puns and monsters thrown in. Visitors meet the redneck outside his trailer in the woods. The redneck says that he and his kin have lived in harmony with Bigfoot for years. But now his singing Big Mouth Billy Bass is missing, and he intends to hunt down Bigfoot to get his fish back.

The hunting trail leads past several “redneck urban legends,” according to Mark, including a crashed flying saucer and a hermit Elvis. Bigfoot is finally spotted inside an outhouse and blown up with dynamite — but the adventure doesn’t end there, of course.

“There were sightings of Bigfoot fifty miles west of here, in Lake Anna, about a month ago,” said Mark. “I told my wife, ‘Oh, sheesh, now people are gonna think I just copied this story.’ And she said, ‘No honey. They’re gonna think you planted it.'”

Hunt Bigfoot with a Redneck

Directions:
I-81 to the exits for Natural Bridge, then follow US 11 into town. At the junction of Hwy 130 and US 11, across Hwy 130 from the entrance to the Natural Bridge attraction. Take the small road up the hill to the parking lot. The entrance to the path up the hill to the attraction is at the far east end of the parking lot, marked by a gate.
Hours:
Closed in 2012 due to nearby fire.
Status:
Gone

6 Responses to “Hunt Bigfoot With A Redneck”