Dr. R. Flanagan Gray worked at the once-secret (now open for tours) Human Centrifuge in Warminster, Pennsylvania. He believed that water cushioning was the key to surviving high-speed travel. At first he used the “Blue Shoe,” a metal bathtub filled with water in which he would sit and ride the centrifuge. It was good, but not good enough. Dr. Gray added a top to the tub, which raised the water level to his nose. Still not good enough. 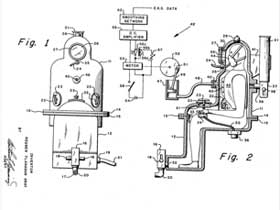 “His idea was, ‘How much can a human stand?'” said Mark Calhoun, VP of the Johnsville Centrifuge and Science Museum. “He knew he could do better.”

So Dr. Gray invented the Iron Maiden. It was like a diver’s suit, except that it kept water in instead of out. “He could hold his breath for seven minutes,” said an admiring Mike Maguire, president of the museum. “He could take anything.”

Dr. Gray would be bolted into the suit, take a very deep breath, then have the suit filled with water. “It was tricky because you had to get all the oxygen out of the water,” said Mark. Air bubbles could act like bullets while spinning on the centrifuge, “especially in your eyes.” 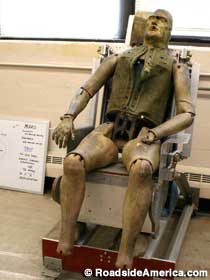 In 1958, sealed in his water-filled Iron Maiden, Dr. Gray rode the centrifuge to 31.25 Gs, a record that’s never been equaled. “He lived just up the road,” said Mike. “The government car would pull in the driveway and dump him off. He could barely walk into the house; he would fall right over. His balance was shot.”

“He had some issues after that,” added Mark. Dr. Gray’s ride gave him a hernia, and the capillaries burst in one eye. “But he lived until 1985.”

The Iron Maiden currently sits in a Navy museum in Maryland, but Mike and Mark hope to bring it back to the centrifuge.

780 Falcon Circle, Warminster, PA
Directions:
I-276/Pennsylvania Turnpike exit 351. Take ramp onto South US 1/Lincoln Hwy, cross Turnpike, then quickly take right ramp onto Hwy 132 W./E. Street Rd. Drive west for 7.5 miles. Turn right onto Jacksonville Rd/Hwy 332. Drive north 1/2 mile. There'll be an intersection of Johnsville Blvd on the right, but instead turn left into the industrial park (look for the sign for Bucks County Forensics Center). Follow the small road around to the left, on right you'll see the Ejection Tower and a tall line of shrubbery -- the building just past it houses the centrifuge.
Status:
Closed

More on The Human Centrifuge