In 2007 artist Tony Tassert created a seven-foot-tall bloodshot eyeball, using his own eye as a reference. It was installed in a park in St. Louis, Missouri, where it creeps out visitors to this day. 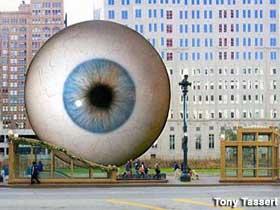 Apparently Tassert felt that the potential of the idea had yet to be exhausted. He created a new version of his eyeball, three stories tall, and has just installed it in another park in an appropriately larger city: Chicago. The media there are treating it as an original idea, probably to the chagrin of St. Louis.

Tassert, who didn’t actually construct the eyeball (that work was left to the fiberglass wizards at F.A.S.T. Corp. in Sparta, Wisconsin) has said that its purpose is “impact.” The Chicago Loop Authority just wants it to draw visitors to an overlooked part of the city, and possibly scare the homeless people out of the park.

Tassert has titled the eyeball “Eye.” It’s scheduled to stand in its current spot until at least Halloween, and possibly longer if it’s well-received. We recommend visiting it before a maintenance vehicle backs into it and sends it rolling down Van Buren St. And we won’t be surprised (and would be delighted) if, in the next few years, a 100-foot-tall bloodshot Tassert eyeball appears in New York City, or perhaps just leering from New Jersey.

1607 Main St., Dallas, TX
Directions:
Downtown. On the north side of Main St. between N. Ervay and N. Akard Sts. Gated, but visible from the street.
Admission:
Free

One Response to “Artist Superduper-Sizes Eyeball For Chicago”