Michael “Jim” Delligatti can eat all the Big Macs he wants in heaven, having passed away Monday at the age of 98. He invented the Big Mac nearly 50 years ago, in 1967, a beefy achievement celebrated in the earthbound Big Mac Museum, which is at the McDonald’s franchise his family has owned for generations in North Huntington, Pennsylvania.

Delligatti was one of the first McDonald’s franchisees (going on to own 48 McD’s in Pennsylvania), and his culinary creation outlived dozens of subsequent Golden Arches menu flameouts such as McLobster and the Hula Burger. 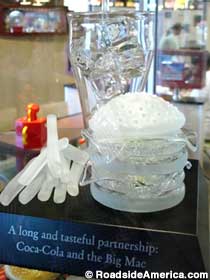 How much Special Sauce did Michael Delligatti ingest over his long lifetime? Perhaps it serves as a Fountain of Youth for those genetically inclined to unlock its tasty secrets.

The Big Mac has sustained countless road trips, and provided vital energy to propel travelers to the next important landmark or heritage site.

Long after the meat in our intestines is finally digested, the legacy of the Big Mac will endure — especially for generations of children who still can’t stop themselves from completing the magical marketing incantation: “Two all beef patties special sauce lettuce…”

Sections: Attraction News Comments Off on Michael Delligatti, Father of the Big Mac (1918-2016)