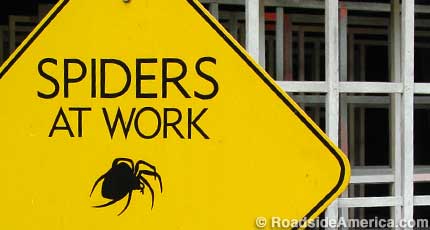 Will Knight, proprietor of Knight’s Spider Web Farm, says he hopes to revive his attraction in 2017 after a devastating fire burned down his workshop barn on October 25th, 2016.

Knight made the pledge to a group of students from Williamstown Elementary School, who visited the farm and gave Knight a check from funds raised by the kids, and a pie topped with a spider-shaped crust. Trapped in a web of love, the normally crusty Knight was reportedly teary-eyed by the outpouring of support.

Knight, who is 90, calls himself Spiderwebman and has been harvesting webs at the Spider Web Farm since the late 1970s. He turns them into art, through a speedy process that is far less labor-intensive than the art created by his only known predecessor, the Spiderweb Lady of Alabama. 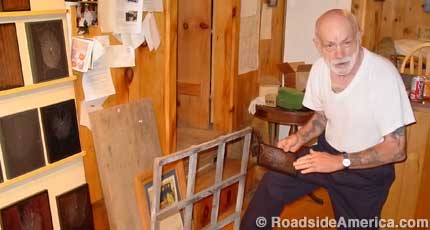 Knight is fortunate to live in a rural neighborhood with many spiders. He could return to production as soon as he can rebuild his workshop, which used only simple tools, and preferably organize it in such a way to make less combustible. Easier said than done for someone in their ninth decade (and with half the arms and legs of a spider), but Spiderwebman sounds determined to get the job done.

Sections: Attraction News Comments Off on Spiderwebman II, We Hope