Thanks to artist Jerome Ferretti, the North Corktown neighborhood of Detroit is now home to a dome-headed cat sculpture that rises up out of the ground beneath a pedestrian overpass that spans highway I-75. 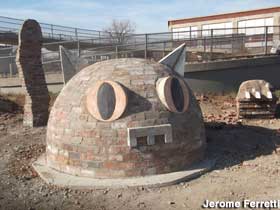 The setting is significant as the overpass once led to the now demolished and much beloved Detroit Tigers stadium. “Monumental Kitty” was inspired by the now-defunct landmark, as well as by Egypt’s monumental Sphinx, a friend’s cat named Cinemax, and the wildly imaginative work of the Spanish architect Antoni Gaudi.

Ferretti raised $1,555 through the Internet funding phenomenon Kickstarter (he explained his plans in this exuberant video appeal). Funds for the feline in hand, he used 3,000 salvaged bricks, along with poured concrete, limestone, and mortar (and a knack for masonry) to build the 9-foot-wide, 7-foot-tall head, with matching tail and paw. The head is filled with gravel and the nose incorporates an old windowsill. The waving creature resembles a super friendly kiln.

Since Ferretti has been an area resident for 30 years, he can easily keep an eye on both his artwork and plans for landscaping by the Corktown Council as they unfold. (Although cats like litter we think this neglected setting could use some sprucing up.)

Ever since New Jersey’s wide-eyed, Santa-hatted “World’s Largest Cat” (a title claim unofficially bestowed by us) was snatched from its perch atop an old garage — its current whereabouts still a mystery — we’ve been bemoaning the country’s sad lack of oversized felines. Jerome Ferretti got the hairball rolling when it comes to big cat creations and transforming a mundane roadway into a true “Highway to Hello Kitty.”

Directions:
At the north end of the pedestrian overpass that crosses over I-75 at Cochrane St. Take I-75 exits 49 or 49A to 12th St., turn north, drive one block. Turn right onto Pine St. and drive two blocks. The Kitty will be on the right.
Status:
Gone

One Response to “Motor City Kitty”