« Motor City Kitty | Main | From the Fossil Record: Who Was a Little Snot? »

Las Vegas Gets The Brush Off 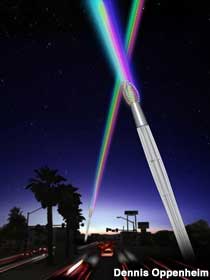 Las Vegas has long been identified with gimmicky, brightly lit signage of gargantuan proportions, so it’s surprising that the city recently fouled up the installation of a pair of 45-foot-tall illuminated paint brushes. The tall twin tools, designed by sculptor Dennis Oppenheim, were meant to mark the “Gateway to the Arts District.” Each brush is programmed with 120 LED bulbs and designed to shoot a beam 2,000 feet into the nighttime sky. The plan was for the two beams to meet and form a brilliant arch.

An official dedication ceremony was set for August 11th, 2010. But the contractor hired for the project decided to change one brush’s orientation, to avoid proximity to power lines. It ended up facing in the wrong direction. Once placement was altered, the intended arch failed to form. Adjustments have been made and the pending public art project should be completed by the end of the year.

The “Paintbrush Gateway” has courted controversy ever since its inception. Some bristled when members of the Las Vegas Arts Commission chose an out-of-town artist. Others balked when the initial proposal came in two million dollars over budget. (The final cost for the two brushes, reduced from an originally planned foursome, is $540,000). 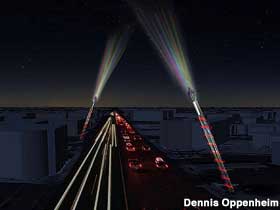 Oppenheim has run into trouble before when stepping out of the gallery scene and entering the charged arena of public art. His “Device to Root Out Evil” (an upside-down church with its steeple stuck into the ground) was rejected by the administration of Stanford University, then purchased by a private Canadian foundation for $300,000 and placed in Harbor Green Park in Vancouver in 2006. It overstayed its welcome, so in 2008 the “permanent installation” was uninstalled and carted off to the more tolerant Glenbow Museum in Calgary.

Still, the commissions keep coming. In 2009, Oppenheim was awarded one million dollars by the Houston Arts Council for a new project, intended to replace the current “Welcome to Houston” sign at George Bush International Airport. “Radiant Fountain” will consist of three 60-foot-high towers that will, when animated, resemble great big splashes of water. Will this project take off smoothly or end up in a perpetual holding pattern?

Update – January 25, 2011: Dennis Oppenheim, 72,  is dead, unexpectedly from an illness, and his paintbrush project for Las Vegas is not finished. The city arts commission intends to see the work completed somehow….

One Response to “Las Vegas Gets The Brush Off”