From the Fossil Record: Who Was a Little Snot? 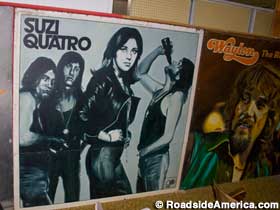 Inside Joe Taylor’s Mt. Blanco Fossil Museum — unique on its own merits — is a room that Joe called “a fossil billboard art museum.” It displays large painted canvases of rock and pop vinyl album covers from the drug-fueled 1970s — just about the last thing you’d expect to find in a 21st century Creationist museum in western Texas.

Joe painted these large artworks, replicas of iconic records by rock groups, and for ten years they were displayed in the windows of record stores in Hollywood. David Bowie, Bob Marley, Carly Simon, Peter Frampton, Three Dog Night — it’s a galaxy of Me Decade superstars.

Joe confessed that he gave Suzi Quatro an abnormally large head because she was “a little snot,” but that he liked fellow Texan Waylon Jennings: “a local boy; I fixed his teeth.” 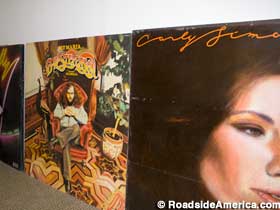 Joe regaled us with tales of meeting music celebrities such as John Denver and The Rolling Stones, and said that he was working on a memoir of his experiences. Should be a good read. Joe has already authored several other original works, including Long Hair, which relates how anti-God communist infiltrators conspired to “get the woman out of the home and into the man’s work force.”

124 W. Main St., Crosbyton, TX
Directions:
Downtown. On the north side of Main St./US 82 one block west of Ayrshire Ave./Hwy 651.
Hours:
Currently closed due to roof damage.
Status:
In Transition

2 Responses to “From the Fossil Record: Who Was a Little Snot?”