“Well, what do you do with a used electric chair?”

That was the question that Duane Tappe of McCook, Nebraska, asked himself. He knew that his state capitol, Lincoln, had an electric chair that it wasn’t planning to use any more. And Duane thought, Why not bring the chair to McCook? It would make a memorable addition to a town museum honoring George Norris, a homegrown hero known as “the father of rural electrification.” 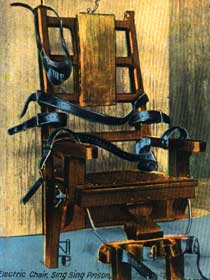 “I was thinking, ‘This was one use of electricity,'” Duane said. “And I think there would be interest in an electric chair. Most of us have never been around one.”

Electrocution as a tool for “teaching” about electricity goes all the way back to the days of Thomas Edison, who had a flair for the dramatic.

Unfortunately, not everyone shared Duane’s curiosity. He was criticized by several Nebraska politicians, mocked by bloggers, and pilloried in an unfriendly press. “It’s been called quite a few adjectives,” Duane said of his idea. “Now we’ve even got neighboring towns taking a shot at us. I didn’t want that to happen. I don’t want us to look like a bunch of redneck hillbillies.”

Duane, who is president of McCook’s Rotary club, has traveled to regional landmarks such as Carhenge and the World’s Largest Ball of Twine, and he knows that those attractions draw “thousands of visitors” and that “you never know what will be interesting to people.” But the media echo chamber of criticism for his idea knocked him for a loop — “Holy cow!” he said to us. Duane now concedes that the Norris museum will probably have to go on without the electric chair as an exhibit.

“I’m 99 percent sure that the big leagues in Lincoln are not going to let [the chair] come to McCook,” Duane said. “I mean, they’re just not going to. I think they would take it apart and throw it in a campfire before they’d let that happen.”

One Response to “Sparks Fly Over Nebraska Fry Chair”