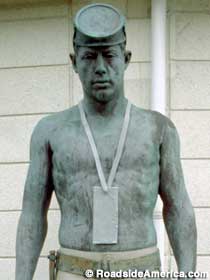 • Seals Seek Pirate Battle Booty: The National Navy UDT-SEAL Museum in Fort Pierce, Florida, wants artifacts from the recent Navy SEAL attacks against pirates off of the coast of Somalia. “The museum has talked about trying to get the lifeboat that Capt. Richard Phillips was held hostage in for five days,” reports the Palm Beach Post, but the museum’s director admitted that acquiring such a memento would be “a stretch.” They might settle for a spent shell casing. In other news: you still have the opportunity to make your voice heard before the museum chooses its outdoor sculpture.

• God of California Wine: Funds are being raised in Napa, California, to erect a 10-foot-tall bronze statue of Robert Mondavi, “the man who, perhaps more than anyone else, elevated the Napa Valley to one of the world’s best-known wine regions,” according to the Napa Valley Register. Will this statue be closer in spirit to rigid bourbon-master Jack Daniel, or jolly join-the-party Gambrinus, King of Beer?

• Wild West Town Rescued: Old Trail Town in Cody, Wyoming, has been “saved forever,” according to the Billings Gazette, overcoming its owner’s messy divorce and Alzheimer’s disease. The conglomeration of local old buildings has been purchased by a non-profit, which has promised to reopen the attraction by Memorial Day. News like this would normally fly under our radar, except that both the Cody Enterprise and the Gazette report that the attraction includes both the cabin and grave “of famed mountain man Jeremiah ‘liver-eating’ Johnson.”

• Alternate Universe Ocean Liner: The Long Beach Press Telegram has published an article listing “some (though likely not all)” of the proposals and gimmicks used to bring more tourists to the mothballed Queen Mary ocean liner in Long Beach, California. We remember when the giant Spruce Goose seaplane was parked nearby (before it moved to the Evergreen Aviation Museum), but the story lists ideas that we’d never heard of — such as a monorail, a science fiction museum, a “Statue of Humanity,” and our favorite suggestion: “send it to the desert.”