The world’s largest head of Barack Obama is about to hit the road. 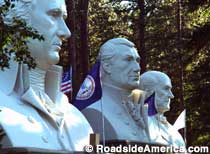 It’s the latest (and reportedly last) in a series of similarly over-sized presidential noggins sculpted by David Adickes. The head will leave his studio in Houston, Texas, take a serpentine journey through 10 states and 40 cities, then arrive at its final destination, Presidents Park in Lead, South Dakota, in time for the sculpture’s dedication on July 4.

“At each stop,” a press release reports, “an encapsulated piece of the President Obama Statue will be gifted to a lucky guest.”

Travelers between now and July 4 should keep their cell phone cameras ready — just in case the 12-ton Obama roars by. 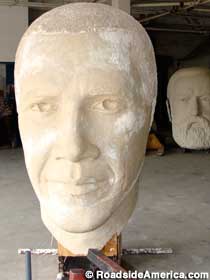 Don’t be alarmed; this is not an insidious final step in the establishment of an Obama cult (after all, it can’t fly like the head of Zardoz). David Adickes has sculpted equally large heads of every President, and he’s only making a big deal of Obama because it’s his last one.

Adickes plans to provide a similarly-sized Obama to Presidential Park at WaterLights in Pearland, Texas, when it opens later this year. A third Presidents Park, in Williamsburg, Virginia, also wants a big Obama, but doesn’t yet have the money to pay for it.