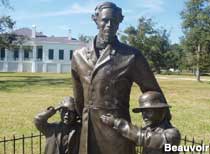 • Slave Owner Statue: The home of Confederate president Jefferson Davis has a new addition — a life-size bronze statue of Davis in a protective, fatherly pose between two boys: his son Joe, and a slave named Jim. A Confederate Veterans group paid for the statue and tried to give it to a Civil War museum in Virginia, and then to the Mississippi state capitol, but it was rejected both times as being too rosy a portrayal of Davis and slave owners.

• Young Abe Stolen: A statue of another boy, a youthful Abe Lincoln, has been stolen from its home at the Lincoln Springs Resort in Ashmore, Illinois. The statue was part of a collection of chainsaw-sculpted Abes that surround the World’s Largest Lincoln Statue. The odd, gnarled statues seemed to us to echo the inner agony of Abe, so whoever took it probably won’t be able to put it on their lawn without drawing a lot of attention.

• Office Grizzly Attraction: The Helena National Forest Lincoln Ranger District office in Montana was as sleepy as its name until it became the home of a stuffed, 830 pound grizzly bear that had been killed by a pickup truck. Now, according to the Billings Gazette, the office is a popular tourist attraction. “I’m just supposed to sell a few maps, give out fishing information, and answer the phone,” the Gazette quotes the man behind the front desk. “Now I’ve got Greyhound buses stopping here.”

• Multicultural Man: Perhaps indicating a shift in the political winds, the state of “Multicultural Man” is finally going to be erected in public in San Pedro, California. The statue caused a stir last year when it was unveiled, because Multicultural Man is nude. Local politicians put him in storage for a year, and the recent re-announcement of its dedication, according to the Daily Breeze, has caused no turmoil.