Plans for a massive train-themed sculpture by spectacle-loving fine artist Jeff Koons may soon be scrapped due to a lack of funding. The $25 million project was originally scheduled for the 2011-2012 season at the Los Angeles County Museum of Art. A 70-foot-long replica of a real Baldwin locomotive was to be suspended from a 161-foot-tall crane. Throughout the day the dangling conceptual choo choo would blow its whistle, emit clouds of steam, and spin its wheels. Apparently this is somehow symbolic of “the preciousness of this moment of life.” Or else,  just plain amusing. 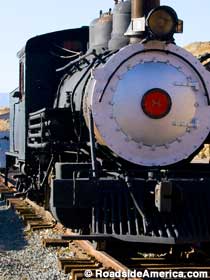 This is not the first time that Koons, who famously enjoys a lucrative strut down the thin line between culture and kitsch, has been inspired by (dare we say it?) oversized Roadside-attraction-inspired objects. He did manage to realize his design for a 43-foot-high topiary West Highland Terrier, which toured around the world back in the ’90s, coming to rest temporarily at Rockefeller Center in 2000 (Wealthy publisher Peter Brant purchased his very own version of Puppy for his Greenwich, Connecticut home).

But has Koons finally set his sights too high? In these days of shrinking museum endowments, perhaps he should consider the fact that you don’t need a monster budget to create a satisfying weird railroad-themed tourist attraction:

Take Fritz’s Railroad Restaurant in Kansas City, where conventional fast food is delivered to your table via train track that runs around up near the ceiling. You can nostalgically place your order with a charmingly old fashioned non-cell phone. Train whistles are available for purchases by those parents who don’t already have a splitting headache.

A Koons-like sense of wonder and excess pervades Northlandz in Flemington, New Jersey, which bills itself as the “world’s largest miniature railway.” Meaning: it’s endless, with eight miles of track and over 4000 teeny tiny buildings. Inspiring or mind-numbingly exhausting? You decide!

Visit Baker’s Junction in Smithville, Indiana for a truly original and surrealistic take on the train museum. This visionary location features a haunted train, “Time Castle,” and hand-lettered sign collection sporting pithy comments about “commey bastards.” One article mentions that owner John Baker’s family likes to “knock each other out with frozen turkeys”. Also, Baker is currently trying to sell part of his finger (severed in a household accident) in order to raise money for roof repair. He’s a regular performance artist!

But the prize for budget-minded train attraction goes to Rochelle Railroad Park in Rochelle, Illinois,  which takes an existing intersection of train lines and turns it into an action-packed destination by providing a viewing pavilion, gift shop, and “Hobo Fire Pits”. And most importantly, tidy restrooms. [Post by Anne D. Bernstein]

Sections: Attraction News Comments Off on Artiste a Poor Conductor of Railroad Art