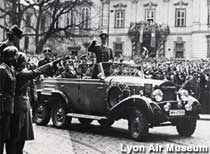 California is a huge state, yet offers only a scattering of exhibits of America’s WWII Third Reich booty. Hitler’s beer steins were once displayed at the Nellie Kuska Museum in Lomita, but it closed some time ago. The Hitler pez dispenser at the Museum of Pez Memorabilia in Burlingame doesn’t date from the 1940s, but is still kept in a back room, hidden from the public.

So we were interested to read of the opening of the new Lyon Air Museum at John Wayne Airport in Costa Mesa. Not so much for its signature displays — a handful of restored World-War-II-era bombers and transport planes — but because it also exhibits a six-wheeled Mercedes-Benz touring car that was used by Adolf Hitler. 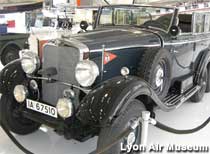 The car, according to the museum, was seized at Bertschesgaden and retains its original bullet-proof glass, pistol holsters, and its original upholstery.

When he wasn’t standing and sieg heiling crowds, Hitler, that frothing megalomaniac, sat right there, and you can take a picture of it, although the velvet ropes around the car prevent you from any further interaction with a Nazi relic. For that, you’d have to travel 3,000 miles to sit on Hitler’s Toilet, but we wouldn’t recommend it.