• World’s Largest Dead Fish: The World’s Largest Dead Fish, which was brought back from extinction only last year, recently found itself endangered again — this time by a waterlogged economy.  Local politicians have reluctantly rallied to save its home, the Vanderbilt Museum in Centerport, New York, by raising golf fees in its posh neighborhood.  The Times Beacon Record quoted one legislator: “Like it or not, it’s our responsibility to maintain this institution.” 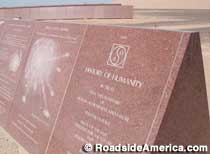 • History of Humankind: Herve Saliou, who is “one of France’s most celebrated artists,” according to the Yuma Sun, has traveled with his brother to sun-baked Felicity, California, to help carve the history of humankind onto a giant granite wall at Jacques Istel’s Center of the World.  “They said ‘There is nothing like this going on anywhere in the world.  We will donate two and a half months of [our] lives to the project,'” Istel told the Sun.  “Now you have to admit that is something.”

• Miraculous Icicle Mary: The Virgin Mary has appeared in Plymouth, Indiana, in the earthly guise of a stalagmite of ice under a trailer hitch. “If you touch snow, your hands get wet,” Gonzalez said this morning. “But if you touch this, it’s like dry ice.” Unlike Supermarket Freezer Mary in Morton, Texas, this Trailer Hitch Mary will probably not survive the Spring thaw to become a permanent attraction — but if She does, then it will be another miracle.

• A Very Special Massacre Anniversary: As we all know, this coming Saturday, February 14, is a special day: the 80th anniversary of the St. Valentine’s Day Massacre!  The garage where the Chicago gangsters were gunned down is long gone, but across the lake in Allegan, Michigan, the Old Jail Museum will be honoring the day by displaying the actual Thompson sub-machine guns used in the Massacre.  Allegan County Sheriff Koops has described the event as, “an exceptional opportunity [to] see a piece of history that is unique and played an important role in the criminal underworld of days gone by.”