« Endangered Species Alert! | Main | Fish Landmarks: Is Being on Land the Problem? »

• Car Air Fresheners: An exhibit devoted to tree-shaped car air fresheners has opened at Saratoga Automobile Museum in Saratoga Springs, New York (The town is also the home of the Car-Freshener Corp., which makes the aromatic rear-view-mirror danglers). A new, limited edition tree and smell has been created for the exhibit, “Avenue of the Pines,” in honor of the road on which the museum stands. 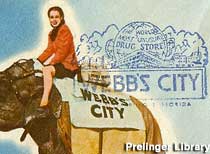 • Webb’s City Revived in Musical: St. Petersburg, Florida, was once home to Webb’s City, “The World’s Most Unusual Drug Store” (It was so unusual that it even had a live mermaid show). The store has passed into history, but its memory lives on in a stage musical, “Webb’s City: The Concert Version,” currently performing at the St. Petersburg Palladium. The St. Petersburg Times reports that “one of its key songs, ‘Wasn’t It a Good Ride?,’ has become popular at graduation ceremonies and funerals.”

• Electronic Games: The Strong National Museum of Play has opened the National Center for the History of Electronic Games in Rochester, New York. It’s currently open only to researchers, but, according to the Rochester Democrat and Chronicle, “In about three years … a large interactive exhibit offering electronic games to play … will frankly address the controversial issues that have long dogged this mass entertainment.” The collection reportedly has over 10,000 titles and examples of every gaming console made since 1972.

• Video Game Capital: Racing Rochester to gaming glory is Ottumwa, Iowa, which hopes to open a video game hall of fame and museum. The farm town has claimed to be “Video Game Capital of the World” since 1982, it hosted the first video game world championship a year later, and it’s the birthplace of the Twin Galaxies video game score-keeping organization. The proprietor of the town’s video arcade told MSNBC that the hall of fame is, “not going to be a dirty room filled with old video games, this is going to be a seriously well-tuned, real museum.”