Fish Landmarks: Is Being on Land the Problem? 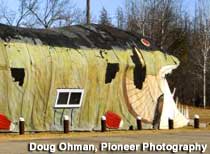 Roadside landmarks succumb to the cycle of damage, both natural and man-made. They’re a magnet for pranksters, thieves, and vandals. On top of that, wear-and-tear inevitably takes its toll on those we love.  Which is why we insist that at least a small fraction of upcoming federally-funded infrastructure projects  address Muffler Man maintenance, shoe tree refurbishing and rotted taxidermy repair. Not to mention all those concrete dinosaurs that could use a new paint job.

Fish-themed sites have been particularly hard-hit in recent years. The Big Fish (formerly the Big Muskie Drive-In) appeared on the 2009 list of “Minnesota’s 10 Most Endangered Historic Places”. The Preservation Society of Minnesota puts out the alert to draw attention to structures that “face imminent danger through demolition, neglect, severe alteration, or inappropriate public policy.” 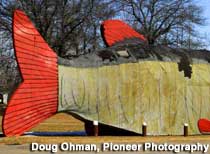 The 65-foot-long, open-mouthed, aquatic photo op sits alongside U.S. Highway 2 near Bena, Minnesota. It began its life cycle in the 1950s as a snack food stand but now serves as a storage shed for a seasonal restaurant. Made famous when it appeared in the opening credits of National Lampoon’s Vacation, it is currently hole-ridden and water-damaged, in danger of collapse. And there’s an ongoing problem with acquisitive scofflaws stealing teeth.

Kitsch kleptos are also a problem in Charleston, Oregon, where two young men snatched the town’s eight-foot-tall Charlie the Tuna Statue back in June of 2008. After cops were tipped off to the statue’s hidden location, the panicked pair took a chainsaw to poor Charlie and cut him into pieces appropriate for a meal of giant wooden sushi.

To our relief, a new Charlie the Tuna statue was unveiled on May 4, 2009. An improved design, this one has movable arms and is securely attached to its cement base. Why do the citizens of Charleston channel their town spirit into celebrating an advertising spokes-fish? (Early commercials voiced by actor Herschel Bernardi, by the way.) Charleston was once called Charleytown, that’s why!

Of course, when it comes to fish disasters, nothing beats the Heddington Shark, located in Oxford, England. [Post by Anne D. Bernstein]

Sections: Attraction News Comments Off on Fish Landmarks: Is Being on Land the Problem?