« Fish Landmarks: Is Being on Land the Problem? | Main | First Post-Iraq War Museum »

In late 2008 the Mustard Museum in Mt. Horeb, Wisconsin, shocked the town when it announced that it was packing up and moving to the nearby city of Middleton.

The people of Mt. Horeb may not have been the only ones who were upset.

As reported in the Wisconsin State Journal, the “Friendly Store” in which the Mustard Museum planned to reopen this November has just been demolished after a 30-foot-long section of its basement wall inexplicably collapsed. Workers inside the building narrowly escaped being buried under tons of friendly bricks.

The Journal treated this as a freak accident, quoting the city’s mayor as saying that, “We still want the Mustard Museum in Middleton.” But we wonder if the city’s officials aren’t fearful that this “accident” was in fact a message — sent by the vengeful trolls of Mt. Horeb. 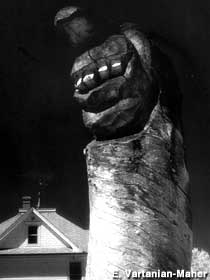 Mt. Horeb is as well-known for its trolls as it is for its Mustard Museum. The creatures reportedly have a bilious temper and great strength. It wouldn’t take more than a couple of these supernatural monsters — their feelings hurt — to knock down that wall with their pile-driver fists.

For now, officials in Middleton are saying all the right things. It was just an accident. The museum is still moving from Mt. Horeb this November. Nothing to see here, folks. But the Mustard Museum’s delicate pots of spicy goodness may be in peril. Trolls don’t like change.