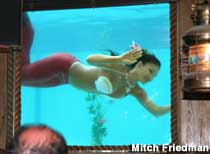 Medusirena is a fire-eating, glass-walking, belly dancing Mermaid. (No, her talents are not demonstrated simultaneously!) She performs swimmingly at Fort Lauderdale, FL’s nautical-themed Wreck Bar during Friday night Happy Hour. She wiggles her shapely artificial tail, swimming past portholes and waving flirtatiously.

Sadly, Medusirena recently announced that there are only three more shows remaining at the Wreck Bar before the Sheraton Yankee Clipper hotel closes for renovations on June 1. No one knows the fate of the net-bedecked and much treasured venue. What will it look like when the hotel is unveiled in January 2010?

No guarantees have been made, which is shame, because as far as we know this is the only Happy Hour Mermaid show left in the country. 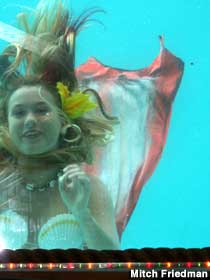 Back in February I took in the limited acrobatics of Medusirena and an unidentified shell-bra-clad sidekick as they undulated in and out of view. Tourists and kitsch-loving locals munched on deep-fried snacks (half price appetizers!) and gulped passable wine, cold beer, and suitably tropical drinks.

Alas, the heyday of the Mermaid Show is over. Way over. Weeki Wachee Springs is still holding out with family friendly fare such as Little Mermaid-themed performances and  Fish Tails, a retrospective take on Mermaid Shows throughout the years, featuring a patriotic red, white, and blue(fish?) salute to America. But it had to be rescued by the state of Florida, and in 2008 its mermaids became government workers.

From 2003-2005 New York City’s Coral Room on West 29th Street tried to bring the phenomenon to a new generation of club kids, featuring a co-ed cast of hip Merpeeps, before the venue turned into a graffiti-and-boom-box themed dance club called Stereo. After a 2008 non-mermaid-related shooting in front of the club, the place was shut down and remains vacant.

Perhaps the last stand of revitalized Mermaid Shows was the one at the Silverton Hotel Casino in Las Vegas, Nevada, which boasted an “underwater fantasy” attraction called “Azure”. But their Mermaid cast has since been fired–yes, the hotel underwent a 130 million dollar expansion.  The 117,000 gallon tank is still in use; the resort now boasts a fish feeding show (the marine biologist in the scuba suit does not do any sexy moves, as far as we know) and a rather psychedelic jellyfish display in the Mermaid Lounge (change the name to The Jellyfish Lounge, already!). 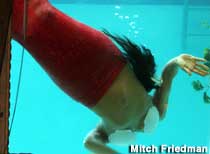 So this is a warning to all Mermaids. Flee at the mention of “renovation”, “modernization”, “revitalization” or any other “-action”. You are doomed!

If you’re in the Fort Lauderdale area, catch the fishy fabulousity of the last three Wreck Bar performances: Fridays May 15, 22 and 29. The show starts at 5:30—get there on time, because it only lasts about a half an hour. The Yankee Clipper: 1140 Seabreeze Blvd, Fort Lauderdale, Florida. [Post by Anne D. Bernstein]