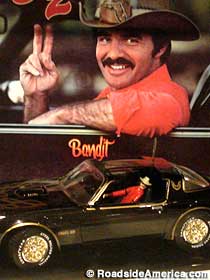 • Burt Reynolds Museum: Drumbeats of doom are sounding in Jupiter, Florida, where an upscale mall is slated to be built on the property now occupied by the Burt Reynolds and Friends Museum. “Demolition… could be in a year,” reports the Palm Beach Post — but we’ve heard this gloomy news before, and Burt’s place always seems to survive another year. “The museum needs to be more than acting classes, photos of Burt Reynolds with Loni Anderson, and canoes used in filming Deliverance.” No it doesn’t!

• Heal me, Red Boiling Springs! The evocatively-named town of Red Boiling Springs, Tennessee, wants to reopen its red boiling springs as a tourist attraction, according to local station WZTV (The springs were shut down by the state because the water was untreated). “The bubbling, sulfur-filled mineral water once drew thousands who swore by it’s power to cure everything from arthritis to kidney stones.” Sounds like Tennessee’s version of Montana’s radon health mines to us — maybe the red boiling water could be zapped with radon?

• Mall Averse to Bison Stampede: Entrepreneur Garry Eiden has been forced to close his tourist attraction in Marbleton, Wyoming, which was a pen packed with seven live bison at a shopping mall. According to the Sublette Examiner, the possibility of a buffalo stampede made the attraction a “dangerous recipe for disaster,” but Eiden was unconvinced. “It’s just like your dog. Why do you like your dog? Because people can pet it and enjoy it – that’s the way I was with the bison.”

• Stoogeum Owner Needs Loud Conk on Head: Gary Lassin, who owns and operates the Stoogeum in Lower Gwynedd, Pennsylvania, has admitted that he’s baffled by the broad popularity of his Three Stooges museum. “I did not foresee this as a tourist destination, but that’s what has happened,” he told the Montgomery News. Lassin reportedly is mulling over the idea of moving the museum to Philadelphia — into the house in which hometown hero (and Stooge) Larry Fine was born.