« Sale Of The Century: Steam Pig Could Be Yours! | Main | Meet John Doe, The Man Who Makes The Monsters » 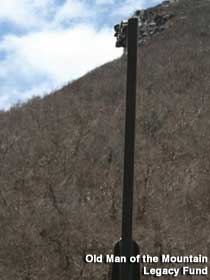 In May 2003 the “Old Man of the Mountain” fell off a cliff in Franconia Notch, New Hampshire. It was a natural rock formation that looked like a craggy face, so loved by its state that its profile is still used on New Hampshire license plates and road signs.

Plans were discussed to somehow revive the Old Man. Sticking something back on the cliff was seen as both disrespectful and impractical, since the Old Man only survived his later years with the help of a maintenance team equipped with anchor cables and epoxy glue. Instead, a memorial was conceived that would give people some idea of what it was like to look up and see the Old Man. It was announced that it would open on the five-year anniversary of the collapse.

In fact it took a little over eight years, but now “profiler plaza” is open. 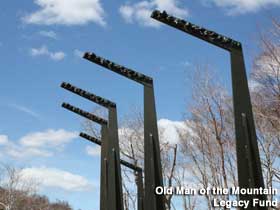 The “profilers” are seven upright steel rods set into a semicircular granite base at the site of the former Old Man overlook. They look like strange, black street lamps with bumpy tops, random and meaningless. But if you stand just so on the plaza and squint at the exact spot where the Old Man used to be, the bumps on the profilers align to recreate its outline.

Future generations will now know that New Hampshire’s icon was actually kind of small and never as spectacular as its reputation. But they’ll also have the interactive experience of standing at a specific spot to see an otherwise meaningless jumble of bumps and angles turn into the face of an Old Man.

Until the profilers fall down.