Meet John Doe, The Man Who Makes The Monsters

Do you want your very own ceramic Braxton County Monster? You might find a used one online, but for a fresh model you have to go to the source: Braxton County, West Virginia. That’s where John Doe (not his real name) lives, and has been selling the monster replicas for almost 50 years.

“Most Braxton County locals think it’s just a hoax,” said John of the monster. He thinks differently, but he also holds positions in various Braxton County organizations, and would rather not draw any more attention to himself as “Monster Man” than he already has.

John said that he got the idea of selling replica monsters in the mid-1960s, when he belonged to the Braxton County Junior Chamber of Commerce. He had a model made from an artist’s concept of the creature — a bug-eyed alien seen next to a grounded flying saucer — then mass-produced it and sold several hundred. Then he got distracted by other projects. “I kinda forgot about it,” he said, but in the mid-1980s he revived the idea and he’s been selling about a dozen monsters a month ever since, out of a gift shop named Bear Heaven. It’s the same model, unchanged, as eerie now as it was a half-century ago.

John was in the same freshman class as Neil Nunley, one of the handful of boys who saw the monster in the town of Flatwoods back in 1952. “Neil was the kind of guy that would spit in the devil’s eye,” said John. “He wasn’t afraid of nothing.” But whenever the subject of the monster came up, John said, “he’d just turn kinda pale and walk away. That got me to kinda believing in this thing.” 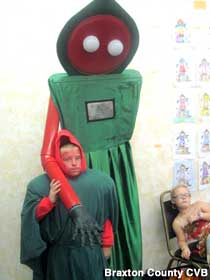 John knows that another West Virginia town, Point Pleasant, has had success promoting its Mothman monster. At various times he’s tried to encourage Braxton County to do likewise. The county visitor’s bureau does have a photo-op monster in its office (and it stocks some of John’s replicas). But the effort is tepid. Braxton County doesn’t really believe in its monster. John at least recognizes its ability to draw a crowd.

Sections: Souvenirs Comments Off on Meet John Doe, The Man Who Makes The Monsters

15 Woodward Drive, Flatwoods, WV
Directions:
Bear Heaven gift shop/Exxon gas station, which is next to the Shoney's. South of Flatwoods, just west of I-79 exit 67, at the entrance to the Flatwoods Factory Outlet Stores.
Hours:
Daily 8 am - 10 pm. (Call to verify) Local health policies may affect hours and access.
Phone:
304-765-7993
Admission:
Statues $45. Look for free.