« Meet John Doe, The Man Who Makes The Monsters | Main | Kentucky Rushmore, Just One Of The Kentucky Wonders » 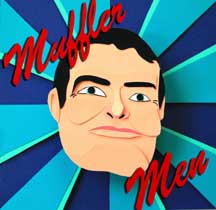 Muffler Men, with their mysterious migrations and fascinating mutations, never fail to mesmerize travelers — almost 50 years since the giant statues first spread along America’s highways, and 15 years since Roadside America collected them in one place to point out the phenomenon.

Now a trio of S.F. Bay Area filmmakers intends to tell the M-Man story in a full-length video documentary, investigating and shooting in Fall 2011. Heather MacLean, Staci DeGagne, and Alex Fletcher and their production company, Clean White Lines, are putting together a cross-country road trip to document the many flavors of Muffler Men and their colorful owners.

While Heather first brought her personal passion for the big fiberglass lugs to her naive comrades, now they are all…how can we best say it? In-statue-ated with the mighty Muffler Men saga.

Here at RoadsideAmerica.com, we’d love to see this project creatively realized. We’ve talked to the documentary team about what might make for great encounters and interviews. And we know that they’ll return with many new anecdotes and perspectives on America’s Last Heroes.

Clean White Lines has launched a Kickstarter Project to get the word out, and to gather funds (target: $30k) from fans and supporters by Sept. 1. We encourage you to check out and support their project! 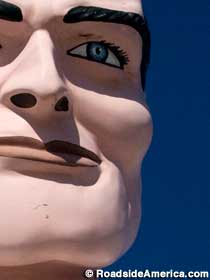 Clean White Lines is also asking for traveler and roadside fan stories of memorable encounters with these roadside giants – the good, the bad, and the crazy. Did you propose to your spouse there?  Pepper one with arrows in your irresponsible youth? Get stung by hornets while posing? The best true tales may make it into the documentary, or even persuade the crew to detour to your town for a personal interview!

[Update: This project was not funded.]