1982 was a rough year for Seguin, Texas — the year that it lost bragging rights as the Home of the World’s Largest Pecan. 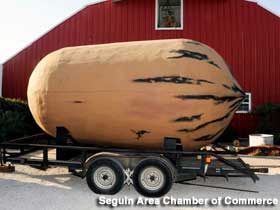 It lost by a wide margin. Seguin’s title-holder, a half-ton creation that sat atop a monument on its courthouse lawn since 1962, was blown away by a six-ton behemoth built by George and Elizabeth James just outside of Brunswick, Missouri. Next to this new champion stood the Nut Hut, selling postcards of the Brunswick pecan, spreading its fame and Seguin’s frustration.

Until 2007, that is. That’s when Sherry Nefford-Esse, president of the Seguin Area Chamber of Commerce, traveled to Brunswick and brought back photos (and probably a postcard) of the pecan. With a better understanding of the competition, Seguin vowed to reclaim its title. In late 2011, it did — unveiling a new champion 16 feet long and 8 feet wide, indisputably the world’s largest. “As the Pecan Capital of Texas,” said Sherry, “we felt we had to have the World’s Largest Pecan.” 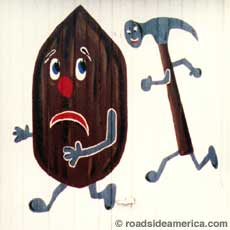 And what about that pecan in Brunswick? George and Elizabeth James grew old and died, and their children lately have been more preoccupied with selling off the farm than maintaining what will always be the World’s Largest 20th Century Pecan. Although its six tons of concrete seem safe for now, we asked the Brunswick Chamber of Commerce if it might eventually move the pecan into town for preservation. The Chamber spokesperson said no, but that the town might be interested in building a “functional” giant pecan — one big enough to house the Chamber of Commerce.

How big would that pecan be? 50 feet long? 100 feet? It may be another 30 years before it’s built, but that’s no problem, said Sherry in Seguin; her town is ready to defend its hard-won title. “You can never say you’ll never be challenged,” said Sherry. “I guess we’ll just have to start planning.”