A Russian submarine in Providence, Rhode Island, is on its way to the scrap yard. 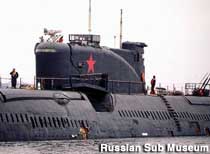 “It was on eBay for $1.4 million and got no takers,” said Ed Sciaba, who runs Rhode Island Recycled Metals. “If you guys wanted to buy it, we’d be happy to sell it to you.”

We said no, reluctantly.

The 300-foot-long sub, cleared of its nuclear warheads, had been docked in Providence harbor as a tourist attraction for years. Then a freak storm sank it to the bottom in 2007. “That’s what happens when you leave hatches open in a storm,” said Ed. “The Coast Guard closed the hurricane gates, and that made the water come up really high, and that was the end of it.”

“It was either flood out Providence or flood the sub. The sub lost.”

A team of Navy divers finally re-floated the 4,000-ton sub in the summer of 2008. It was clear, however, that the sub had suffered too much damage to be reopened for tours. “It’d coast at least a million bucks,” was Ed’s professional assessment. “You’d have to clean it, rehab it, sandblast it — it’s a mess.” Hoping that some benefactor with deep pockets would rescue it, the sub was put up for sale. But a January 31 deadline passed with no takers, and when no interest surfaced in February, either, the decision was made to scrap the sub. 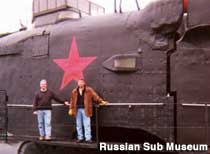 Tourists can still visit its exterior, but not for long. Ed plans to tow it away in mid-to-late March. His dry dock is less than a half-mile away, so the scrapping itself will become a Providence harbor tourist attraction for 2009, although a sad one.

“Nobody’s cut up a Russian sub before,” Ed said. “Some guy e-mailed me the other day; he wants one of the doors for his wine cellar in Australia.”