We reported last July that the mounted head of Old Baldy, hero horse of the Union Army, was about to go into storage. A swank new home was being built for him in Philadelphia, where the new Civil War and Underground Railroad Museum would open by 2010, or at the latest by 2011, the 150th anniversary of the start of the war. 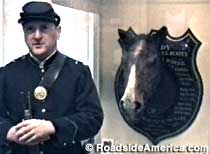 Now the governor of Pennsylvania has ruined those plans.

According to the Philadelphia Inquirer, governor Ed Rendell has “refused promised capital funding” for the museum, which, unfortunately, had already sold its old headquarters and boxed up Old Baldy, after being assured that the funding would be approved. The museum now has nowhere to go.

An e-mail from the governor’s office to the Inquirer declared that “he cannot fund every project” and this is true, but Old Baldy cannot be snidely equated with installing highway sign solar panels or buffing the state capitol’s marble floors. Old Baldy is a head. Of a horse. There’s nothing else like him in Pennsylvania, and he may not be in Pennsylvania much longer. Richmond, Virginia, for example, has in the past courted Old Baldy’s museum, which may now be forced to relocate so that it can open to the public by the sesquicentennial.

If the museum does move, we wouldn’t mind seeing Old Baldy first take a detour into Governor Rendell’s palatial bed — as a warning against further bad behavior.

Sections: Attraction News Comments Off on Old Baldy In Limbo, Governor To Blame

Grand Army of the Republic Museum and Library

4278 Griscom St., Philadelphia, PA
Directions:
In the northeast Frankfort part of the city, in the Grand Army of the Republic Museum and Library. I-95 exit 25. Drive west on Allegheny Ave. for about a mile, then turn right onto Frankford Ave. Drive north for a little over 1.5 miles. When the elevated rail lines come over the street, turn left at the second stoplight onto Church St. Drive one block and turn left onto Griscom St. The Museum will be at the end of the block, on the right, in the tall brick house.
Hours:
Tu 12-4 pm, 1st Sun of month 12-5 pm. (Call to verify) Local health policies may affect hours and access.
Phone:
215-289-6484
RA Rates:
Worth a Detour