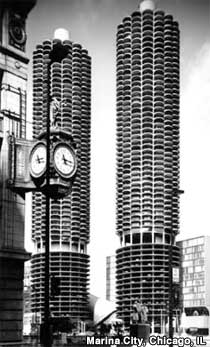 Okay, so the National Building Museum could use a jazzier name (Architecturama?) and their new exhibit, “House of Cars: Innovation and the Parking Garage” (October 17-July 11), takes on a generally less-than-scintillating subject. But these car-crazy curators may have a point: this overlooked and much maligned practical urban necessity deserves a spot on the exhibition roster. For, as the press release states, “In a world without parking garages, parking lots would sprawl across our cities.” And that would be yucky.

Although many garages double as appalling eyesores, the show highlights innovative designs from such architect showboats as Frank Lloyd Wright and Eero Saarinen. It also touches upon the role of parking garages in popular culture, with appearances in All the President’s Men, Seinfeld, and way too many stock shoot-out scenes to possibly list.

If you’re in DC, make sure to check out the “automated hoist systems,” “an early time stamp machine,” and “a touchable model of a ramp system.” For those of you who wil not be pulling into the National Building Museum any time soon, here are RoadsideAmerica.com’s favorite garage destinations:

The most beautiful parking garage in America is the former Michigan Theater in Detroit. The elaborate French Renaissance interior was created in 1925 as a movie palace, complete with Wurlitzer organ and classy artwork imported from Europe. It later served as a concert hall until 1976. (Bowie, Kiss, and Aerosmith all performed there.) Most of the interior was gutted to create office building parking, although the incredibly ornate ceiling remains. You can see this auto wonderland in the Eminem movie 8 Mile.

In stark contrast, a modest 12-foot by 18-foot wooden garage in Palo Alto is recognized as California Historical Landmark Number 976 and the birthplace of Silicon Valley. This is where, in the late 1930’s, Bill Hewett and Dave Packard fiddled around with oscillators, before going on to grow their humble business into the computer behemoth it is today. The garage is not open to the public, although you can view it from the sidewalk (367 Addison Avenue) and peruse an informative plaque.

If you’re more body than mind, you may prefer to gaze at the former site of The Paradise Garage at 84 King Street in Manhattan. Imagine the sweat-soaked hoards of dance-crazy, disco-loving, partying revelers that packed the place from 1976-1987. It is now a pedestrian-looking Verizon Communications facility, and sadly, lacks a commemorative plaque. [Post by Anne D. Bernstein]

Sections: Events Comments Off on Parking Spots: House of Cars