The proud pink flamingo which adorned a steel fire escape above Baltimore’s Cafe Hon has triumphed in its bureaucratic battle with city officials.

Back in early October — after the decorative bird had spent about seven years minding its own business — city inspectors made a big stink over the giant pink waterfowl. A governmental brouhaha resulted from concerns that it was projecting “into the public right of way” (by how many inches exactly?). Therefore, the Department of General Services insisted that owner Denise Whiting apply for a serious-sounding “minor privilege permit” with an annual fee of $800. 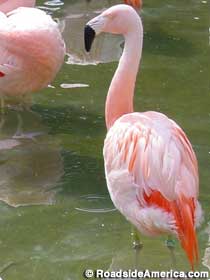 Taking a principled stand (or perhaps courting a little extra free publicity), Whiting refused to go along and defiantly removed the gaudy icon from its public perch. This was not too difficult, as it was made out of a bed sheet and some chicken wire.

Eventually, the band of picky paper pushers backed down. Were they embarrassed by the way supportive media outlets flocked to the story? Or did they realize that putting an attention-getting, oversized animal in front of your business is enterprising capitalism at its best? (See Mainer C. Lobster in Woolwich, Maine or the angry giant badger head standing guard outside the Northern Exposure Gentleman’s Club in Birnamwood, WI.)

And Baltimore will always have a connection to Pink Flamingos by way of its native son, director John Waters, even though no Pink Flamingos appear in that internationally known (if not acclaimed)  film…

In any case, Whiting and the city reached an agreement on a reduced annual fee of $400. Plans are being made to create a new fiberglass version of the feathery feature and to proudly mount it above the Hampden neighborhood eatery, where it will hopefully hover forever, hon. [Post by Anne D. Bernstein]