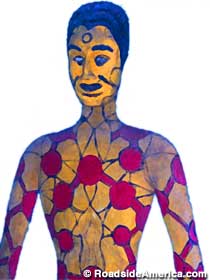 It’s difficult to guess what St. EOM would have thought of this — perhaps he’d dance through downtown Columbus, Georgia in his wizard duds — but his Pasaquan, in Buena Vista, has just been added to the National Register of Historic Places.

Pasaquan is equal parts mysticism, geometry, and snake handling — a four-acre concrete compound that was built by St. EOM, aka Eddie Owens Martin, from the late 1950s until his suicide in the mid-1980s. The folk art enclave has been tended by volunteers since Eddie’s exit, and has been visited by countless Roadsiders despite the local highway department’s tendency to remove its directional signs. Pasaquan celebrated the 100th birthday of Eddie this past July 4th.

“No money comes with the designation,” notes an article in the Columbus Ledger-Enquirer, but at least Pasaquan can’t be knocked down as easily if the county decides to widen the road (it’s a bit off the road, anyway). Or at least whoever knocks it down has to take heat for demolishing a Registered Historic Site. 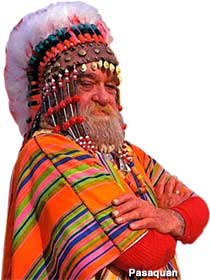 We like to see weird places protected. The National Register of Historic Places, fickle pseudo-guardian that it is, declares some worthy and others not. Boosters of a particular site can apply for consideration for the registry — it apparently helps if a real historian or architecture expert is nominating. But it also feels like the National Register is “mainstreaming” oddball landmarks with their smooch of approval. And hence their list becomes less trustworthy as a way to filter out mainstream destinations from our travel plans (Remember what happened to the History Channel, which at one time could be trusted to feature programs about actual history, but now considers anything that happened more than 2 seconds ago sufficiently aged and cured for their viewers).

Whatever. While the feds are open to including this funky part of Georgia, perhaps they could look north and bestow their protection on what’s left of Paradise Gardens….