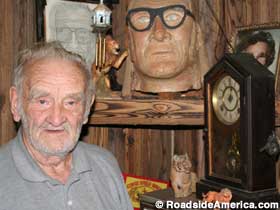 For many decades, only on a farm in Aniwa, Wisconsin could travelers stop and witness a lone man coaxing a lion to leap though a narrow, flaming hoop.

On March 29, 2011, that man, Wilbert Behn, passed away, days shy of his 92nd birthday. He was the self-proclaimed world’s oldest lion tamer and the last living member of RoadsideAmerica.com’s Hall of Immortals.

Along with his wife, Martha, Wilbert opened Behn’s Game Farm in the small town of Aniwa, Wisconsin, in 1962. It was home for his family, his Bengali and Siberian cats, and a menagerie of other entertaining animals. Until the early 2000s Wilbert would regularly stage fire-eating and lion-and-tiger-taming performances at the Farm in his hand-built plywood arena. 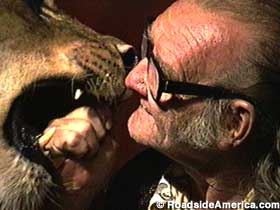 His shows were lively and terrifying (“How old is that guy?”) but Wilbert was always the master in the ring, whether making a tiger walk a high wire or sticking his head in a lion’s mouth. Anyone who ever saw Wilbert’s show never forgot it.

Martha and Wilbert retired in 2005 — we were fortunate enough to visit them that summer and see the final days of the tourist attraction.

Behn’s Game Farm was a one-of-a-kind family-run jungle-animal-thrill attraction in a part of the world where you expect to see cows, not lions and tigers. It was all because of Wilbert. We will miss him.

One Response to “R.I.P. Wilbert Behn”