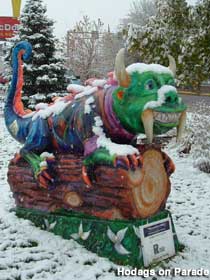 Community art projects, the temporary scattering of custom-painted-but-identically-formed fiberglass cows or bears around a town, rarely appeal to us. Good for the fiberglass sculpture industry, good for civic fund-raising, but too mass-produced, too normal.  Innovative examples, such as Rhode Island’s Mr. Potato Heads, are uncommon.

Now add Rhinelander, Wisconsin, to the exceptions pile. For a century the town has embraced a monster, the Hodag, as its civic symbol, proudly peppering its streets with varying representations of the fanged beast. Now the town has announced that seven more seven-foot-long Hodags will arrive in late May, and it’s soliciting submissions from people who want the chance to paint them.

This is the second, expanded year of the project (Last year’s experiment proved successful, and most are still on public display). Sue Bessert, executive director of Downtown Rhinelander, assured us that “all submissions are welcome,” although the town hasn’t quite figured out yet how it would get a blank Hodag to a winning artist who lived far away from Rhinelander. “If a design comes in that’s wonderful, we’re up for the challenge,” she said.

Would adding even more Hodags to the streets of Rhinelander run the risk of creating a monster glut? “Are there ever too many Hodags?” Sue asked, trying to absorb the question. “No way!”

Home of the Hodag

More on Home of the Hodag