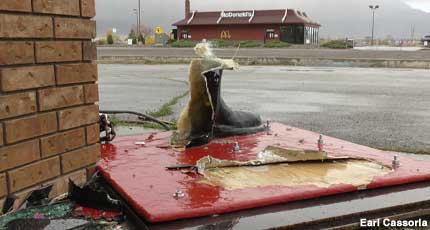 Nevada is known for its history of Cold War atomic blasts, but it may have dodged a fireworks mushroom cloud in 2016 due to the sacrifice of a Muffler Man.

“Roller Coaster Red” was destroyed only four months after his debut outside a Battle Mountain fireworks store. He was a brand-new 14-ft. tall Muffler Man, custom built by fiberglass guru Mark Cline.

According to Red’s owners, the statue was toppled by a pickup truck — also red — that careened off the highway on Oct. 30, plowed through fences, jumped the curb, and hit the building.

A photo from the scene shows the pickup wedged at an angle into the front of the store. Next to the truck lays the Muffler Man, severed at the ankles, its right arm decapitated, left arm clutching its damaged giant firecracker.  Red’s hollow fiberglass body probably did little to deflect the truck — perhaps just enough to prevent it from entering the store head-on.

The crash is still under police investigation.

The owners believe repair is not feasible, and are considering replacement with a new figure. For now, only one foot remains visible, still attached to its base.