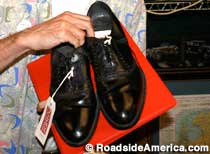 Saturday, November 22, is the 45th anniversary of the assassination of John F. Kennedy. In remembrance, Wayne Lensing is giving the public a special viewing — of the shoes worn by Jack Ruby when he shot Kennedy’s assassin, Lee Harvey Oswald.

Wayne is the guiding force behind Historic Auto Attractions in Roscoe, Illinois, and a self-confessed JFK buff. His oddly-named attraction, which is in fact a top-of-the-line pop culture/history museum, has an entire section devoted to JFK assassination artifacts. The shoes, which Wayne purchased at an auction in March, will be permanently added to the museum’s collection next year. Wayne, however, wanted the public to see them on the assassination anniversary (although not the Oswald assassination anniversary, which is two days later). 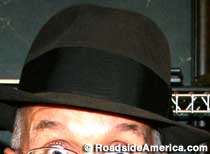 We visited with Wayne this past summer, and he showed us the shoes (which were just sitting on a shelf in his office), as well as the hat and jacket that Ruby was wearing, which Wayne had also acquired for his museum. He bid on the assassination gun, too, but he didn’t get it. In fact, no one did. “My God, I’d love to have that for my museum,” he told us. “But it’s got a price tag on it of at least $1 million. That’s a lot of zeroes.”