Gravity hills, magnetic hills, whatever you want to call them, play havoc with the forces of nature — by making cars roll backwards and uphill — but they are surprisingly delicate phenomena. 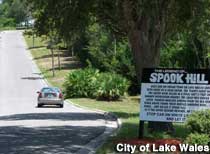 The Lake Wales News has reported that recent modifications around Spook Hill in Lake Wales, Florida, may have lessened its spookiness. The paper suggests that “several layers of pavement resurfacing, and the subsequent cracking of that newer pavement,” are to blame, and quotes a local man who claims that almost two-thirds of Spook Hill’s visitors no longer experience its mysterious powers.

That sounded calamitous to us, so we spoke with John Paul Rogers, a Lake Wales city commissioner and a resident since the 1930s. He said that cars no longer roll uphill as far as they used to, but added that the phase of the moon may be the culprit (he claimed that the effect was strongest on Full Moon days). He also added that, “it’s not a magnetic thing because a grapefruit will roll up it.” 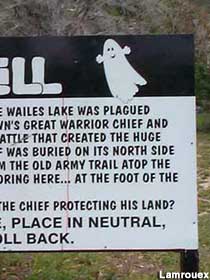 We talked with Betty Wojcik, executive director of the Lake Wales Chamber of Commerce. She had her own theory about Spook Hill. “With the smaller cars you don’t feel it like in the old days, when people had bigger cars,” she said (Perhaps that’s why there are so few gravity hills in Europe, land of microcars).

Betty had also heard that Spook Hill’s recent power outage was not the fault of its repaving, but because the Spook Hill starting line — helpfully painted by the city on the asphalt — was repainted in the wrong spot.

“The hill is there and it still does work,” Betty said. But she agreed that Spook Hill’s recent discombobulations have shown that it’s just as fragile as any rain forest or coral reef. “There needs to be some ordnance to protect it.”

N. Wales Drive, Lake Wales, FL
Directions:
The sign marking the start point of Spook Hill is on the east side of N. Wales Drive/5th St. about a quarter-mile south of Hwy 17/Burns Ave.
Hours:
Public road. Hazard flashers recommended. Use at your own risk. Local health policies may affect hours and access.
RA Rates:
Worth a Detour