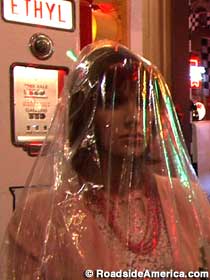 On our whirlwind tour of Dragon Man’s Military Museum, we spotted a few Elvis-Presley-as-GI photos near one of the armored personnel carriers. Elvis? Was tattooed tough-talking Mel “Dragon Man” Bernstein a fan? “I have a small Elvis collection,” he said. “Would you like to see it?”

That “small” tag was Mel’s idea of a joke. Mel never does anything small.

He walked us into a room the size of a house, packed with Elvis-abilia — Mel even owns one of The King’s guitars — but packed even more with 1950s mementos. 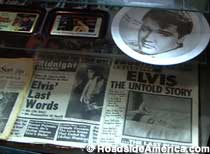 “I love all this stuff,” Mel said. “It brings back a lot of memories.”

On one side of the room were all of Mel’s old cars: his ’28 Roadster, his ’30 Coupe, his ’55 Chevy, his 800 horsepower dragster. On the other was Mel’s vintage “poodle outfit” collection, modeled on 25 glamor mannequins, some sitting in a recreated Soda Shoppe with a dummy of The Fonz. 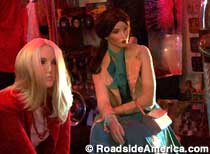 “You know what ruined it?” Mel said. “1964, when the Beatles came. Ruined everything. Stupid haircuts. Drugs. They blew the whole thing.”

Sections: Places Comments Off on Dragon Man’s Crush on the 1950s

1200 Dragon Man Drive, Colorado Springs, CO
Directions:
US 24/Platte Ave. to the east edge of the city. Turn right onto Hwy 94. Drive east for around six miles, then turn left onto Curtis Rd. Drive north for one mile, then turn left onto Dragon Man Drive.
Hours:
Sundays, May-Oct., for a public tour that begins promptly at 10 AM. (Call to verify) Local health policies may affect hours and access.
Phone:
719-683-2200
Admission:
Adults $15.
RA Rates:
The Best