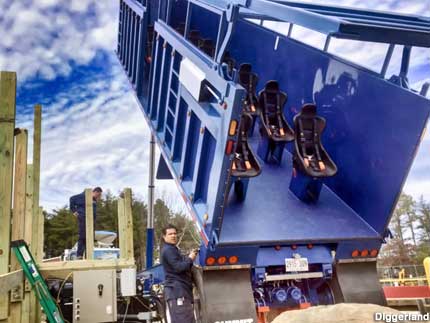 For decades New Jersey was used and abused as a landfill by its urban neighbors, dotted with smelly, heaping, seagull-infested mini-mountains packed with everything from New York City’s garbage to Philadelphia’s dead mobsters.

Now tourists in The Garden State will be able to experience for themselves what it’s like to be trash.

Named “The Greased Beast,” according to its press release, it’s a first-of-its-kind thrill ride built into a giant dump truck by Diggerland, “America’s first and only construction-themed adventure park,” in West Berlin, New Jersey.

Down-and-dirty thrill seekers, the release explains, will be strapped into seats bolted into the dump bed of the giant truck, which was originally built to haul bulky waste from construction sites. The truck’s hydraulic piston will then slowly raise the dump bed higher and higher, finally reaching a steep angle over 30 feet in the air, and then, “the machine’s tail gate opens and vibration activates; giving the riders a simulated experience of being a dump truck’s payload.” Or, as a promotional video for The Greased Beast promises, “You’re getting dumped just like the 80,000 pounds of raw material this beast was designed to haul!”

Plans are for The Greased Beast to dump its first human payload on March 25.