« Palace On A Budget: No Bread For Corn | Main | Latest Thrill: Taking a Dump in New Jersey »

Party’s Over On Post-Apocalyptic Highway 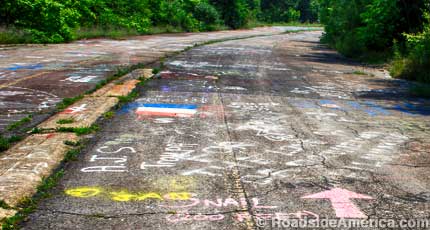 Since the early 1990s, a three-quarter mile stretch of Pennsylvania Highway 61 has been closed – blocked with berms of earth at both ends – because the ground beneath it is on fire.

The highway stretches south from Centralia, a town that was abandoned when a coal mine started burning underneath it, with no way to ever put it out. Most of Centralia’s buildings were bulldozed, but the highway was simply left to decay, probably in the belief that no sane person would ever want to visit it.

That theory, of course, proved wrong. The road attracted curious visitors, then visitors with spray cans (who christened it “Graffiti Highway”), and more recently visitors who perceive it as a kind of Damnation Alley playground.

A news story in the Pottsville Republican Herald reports that Pennsylvania state police are now ticketing people who visit the highway, after it was discovered on Facebook that a “Barbie Jeep Racing” event was being planned for the road, with about 1,000 people interested in attending. The race, according to the Republican Herald, “would have featured adults driving battery powered children’s vehicles.” 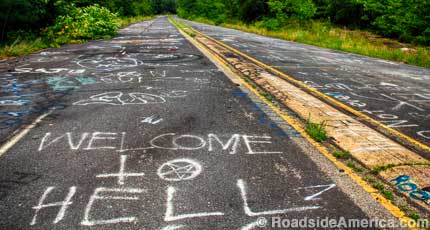 Purge, if you can, that disturbing image from your mind, and remember: the ground beneath the highway is on fire. Steam and smoke rise through cracks in the asphalt on cool mornings. One of the few buildings left standing in Centralia is its rescue squad, because people need rescuing after they fall into hot-pocket holes that have opened in and around the town, including holes on the no-trespassing Graffiti Highway.

The Republican Herald story ends by mentioning that, in addition to the highway, visitors aren’t welcome in Centralia, either, and that the town, despite its popularity, has been removed as a tourist destination from the county visitors’ bureau website.

Sections: Attraction News, Closing Comments Off on Party’s Over On Post-Apocalyptic Highway

More on Centralia Mine Fire