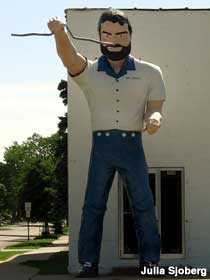 The tailpipe-hoisting icon of Buck’s Muffler Shop in Sioux Falls, South Dakota, fell to a minivan on St. Patrick’s Day.

“His right leg is busted up really bad, in lots and lots of pieces,” said Jerry Wallenstein, owner of the shop and of Mr. Bendo, a Muffler Man. “The other one’s all there, but it’s just about cracked off. That guy crushed it.”

(Note: there are several other Mr. Bendos across the country. They have not been harmed.)

The 27-year-old driver tried to make a turn in front of the muffler shop and instead plowed into it and Mr. Bendo. The driver had rear-ended another vehicle elsewhere in Sioux Falls before his encounter with the statue. “He was drunk, no insurance,” said Jerry of the driver. “It’s a good thing he hit the building. That saved the leg a little.”

An impromtu Facebook support group — Fix Mr. Bendo — was rapidly accumulating fans; at some point, if Bendo stays down, we predict it could exceed the population of Sioux Falls.

Mr. Bendo has held aloft his tailpipe since 1963.

2516 S. Minnesota Ave., Sioux Falls, SD
Directions:
Automotive Brake and Exhaust. South side of the city. I-229 exit 3. Drive north one mile on US Hwy 229 BUS/S. Minnesota Ave. Mr. Bendo will be on the right, between 34th and 33rd Sts.
RA Rates:
Worth a Detour